This side view of Ngātokimatawhaorua illustrates the amazing length and carrying capacity of waka taua. Traditionally, when Kupe discovered New Zealand his waka was named Matawhaorua. But on his return to Hawaiki, it was re-adzed and named Ngātokimatawhaorua (‘ngā toki’ means ‘the adzes’). It was captained by Nukutawhiti on its return to New Zealand. The waka shown here was named after the original and built for the centennial of the signing of the Treaty of Waitangi in 1940. The inspiration for its construction came from Te Puea Hērangi, an influential leader in the King movement, and the project was directed by Pita Heperi (of Te Tai Tokerau) and Piri Poutapu (Waikato). It is now kept at Waitangi, in the Bay of Islands.

The epic story of Ngāpuhi unfolds down the generations, beginning in a distant time and place, with an incident that is both ordinary and extraordinary.

The time was approximately 20 generations before Kupe, the great Polynesian navigator who discovered Aotearoa, with another two or three generations before the great migration to these shores. The place was Hawaiki, which is sometimes described as a mythical place, although it most certainly existed even if we no longer know its exact location.

The incident involved Kareroariki, a mother-to-be who craved a special food; common enough for pregnant women.

What made it extraordinary was that she did not crave some special kai moana or fruit. No, Kareroariki hungered for the taste of the human heart. As an ariki, or chieftainess, she had the authority to demand her wish be granted and a highborn young maiden, of a similar rank, was sacrificed to satisfy this desire.

This is the beginning of the esoteric knowledge that has been passed down, in oral tradition, from our forbears and is taught today in our wananga.

Three names emerge from the birth of the child of Kareroariki, – they are Puhikaiariki, Puhimoanariki and Puhitaniwharau – which collectively give rise to the plural, ngā, or many – Ngāpuhi. All three feature significantly in Ngāpuhi history.

The fact that we take our name from an event – rather than an ancestor, as is the case with most tribes – is highly unusual. Indeed there are orators who would deny this entirely, referring to Puhimoanariki of the Mataatua waka, as the original ancestor of Ngāpuhi. There is however no korero, or oral tradition, to support this.

All waka with Ngāpuhi whakapapa – that is to say genealogical lines – landed in Hokianga and spread out from there. So it is that we Ngāpuhi claim a tribal area with boundaries described in this whakatauki or proverb:

(The house of Ngāpuhi stretches from Tāmaki Makaurau in the south to Cape Reinga in the north, its walls are the sub-tribes: Ngāti Whatua in the south, Te Rārawa in the west, Te Aupouri in the north and Ngāti Kahu in the east, Ngāpuhi holds the centre of the House, and the mountains of significance within Ngapuhi are the pillars or poupou, which hold the ridgepole aloft.)

Another mark of Ngāpuhi is that we are fiercely loyal to our whanāu and hapū. Our traditional, communal way of life, focused around our marae, seeks to remain as strong today as in the time of Kareroariki.

Our history reminds us that we too often bickered among ourselves, but when facing a common enemy we would set aside our differences, our rangatira would gather, agree on a battle plan and then fight as one. In this way many a dreadful enemy was defeated.

Today we must act in a similar manner, always mindful of the needs of individual whanāu and hapū within our takiwā. Yet equally determined to act with common purpose for the collective good. We must seek true tino rangatiratanga – economic, cultural and social freedom – for the Ngāpuhi nation as a whole. Once again we must face the challenges that confront us together.

This is the knowledge handed down to Rāniera Tei Ringa (Sonny) Tau from his ancestors.

Te Parawhau is located to the west of Whāngārei. They have close connections with Ngātiwai, Ngāpuhi and Ngāti Whātua, and also with Tahuwhakatiki, a captain of the Te Arawa canoe, who settled in Whāngārei. The people of Parawhau have a proud history, strong traditions and culture. Their descendants, who retain their tribal lands at Toe Toe, Otaika, are the tangata whenua who hold mana whenua, ahi ka, over the area.

One day almost two hundred years ago, the tribe that lived on the summit of Parahaka Mountain were making nets under the supervision of their chief. When the nets were almost finished, the chief sent some of his men into the bush to gather the wood of the whau tree to make the floats. 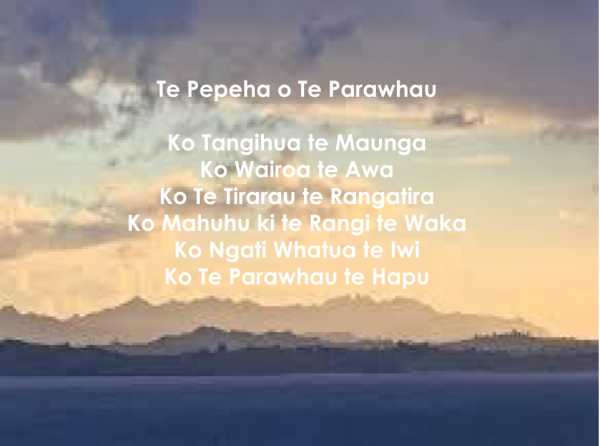 Manaia View School acknowledges that the land they sit upon is the Whenua of Parawhau.

The men selected some suitably dry wood and sat down to whittle it into shape with their sharp stone implements. They worked diligently until they had fashioned many floats. Then, well pleased with themselves, they returned to the kainga. But, to their great surprise, their friends burst out laughing at the sight of them and said teasingly, “ Look at yourselves! Look at the bits of sawdust sticking to your bodies! O brave warriors, you are covered with the refuse of the whau tree. What a funny sight you make!”

Ever since then, that particular branch of the tribe has been known as Parawhau tribe (para: refuse; whau: from the tree whose wood the men used to make the floats.

There is also a tradition that says when the tribe was under siege on a mountain in Whāngārei the ancestor Para performed a haka (war dance) to rally his people to victory. The name of the mountain has since changed from Parahaka (the haka of Para) to Parahaki. 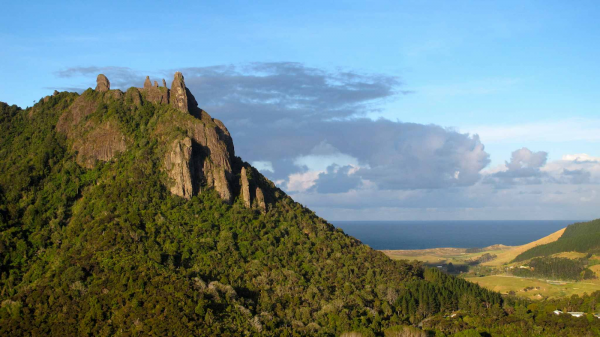 Mount Manaia features not only in the school’s name but also in its logo. The four syndicates are named after the levels of the maunga: this represents the journey of our tamariki as they move from the junior school, at the base of Mount Manaia towards the top of the maunga in the senior school. 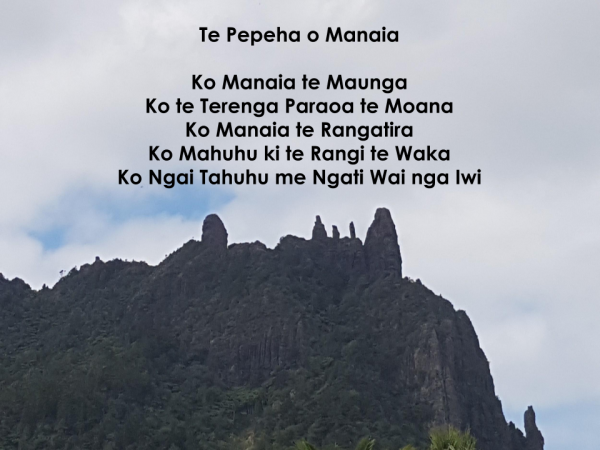 Manaia – the mountain and the ancestor  (may include the pepeha of Manaia under this heading?)

Another tradition explains how Manaia, the ancestor, became part of a mountain summit. One day when out fishing Manaia hooked a fish by its anus. Taking this as a bad omen, he paddled home. As he drew towards the shore he called to his wife to come and meet him. When she lifted up her clothes to swim out Manaia saw from the appearance of her body that she had slept with his servant Paeko. Manaia and Paeko challenged each other with incantations until Manaia and his wife, along with Paeko and several of Manaia’s children, were turned into the distinctive jagged peaks atop the mountain.

These are linked to our maunga – Mount Manaia, symbolising our journey of learning at Manaia View school.
Pararahi  |  base of the maunga
Our most junior classes make up this syndicate. Years 1,2 and 3. This is the beginning of the journey towards our students graduate profile.
Matapari  |  cliff face
Our lower middle syndicate comprising years 3 and 4. This syndicate may be amalgamated into others depending on student numbers and class compositions.

Paemaunga  |  montains ridge
Our middle syndicate`s comprising of years 4, 5 and 6. Students at this level are moving towards achieving aspects of learning and well-being in the graduate profile.
Tihirau  |  maunga peaks
This is the senior syndicate comprising of year 7 and 8 students. By the end of year 8 they will move to achieving the goals of a student graduating from Manaia View school.

“Ko te moemoea mo nga tamariki o te kura nei ki te piki te maunga, kia whakatinana te moemoea.”
Our dream is for all students to experience the view from the top and have the attributes to achieve their dreams.

Terenga Paraoa marae is located in the heart of Whangarei city.

It is connected to the iwi of Ngāti Wai, Ngāti Hine, Parawhau and also links to the Ngāti Whatua and Ngāpuhi confederations.

The wharenui is Kaka Porowini. Terenga Paraoa marae is named in reference to the Whangarei Harbour, referring to the ‘water in which the whales run’. 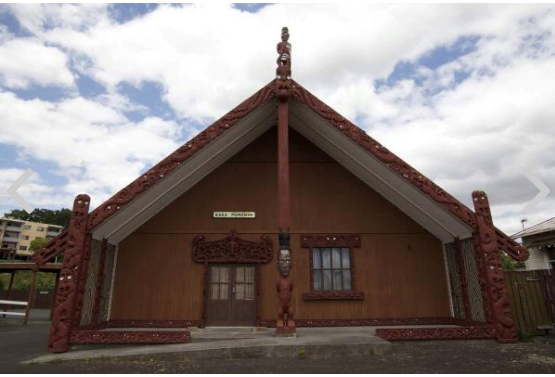 The gathering place of the whales

Te Terenga Parāoa is another name by which Whangārei is known. It means the gathering place for the whales.

Parāoa is the Māori name for the sperm whale. This great creature is held in high regard by Māori who refer to it as the largest ‘fish’ of the ocean. Symbolically the parāoa represents persons of chiefly status. As carved sculpture or painted motif it symbolises wealth, rich food and abundance. Its stranding heralds sacred events. As a place name Te Terenga Parāoa indicates an area rich in resources, land, food and people. To the old-time Māori the parāoa was an important gift from the gods. In large quantity it meant meat for food, oil to light lamps, massage limbs, mix coloured clay into paint, the hard bone fashioned into domestic utensils, weapons for war and items of chiefly adornment. In days past the parāoa frequented the waters outside Whangārei harbour in numbers, sometimes coming inside the harbour to strand on the outgoing tide. 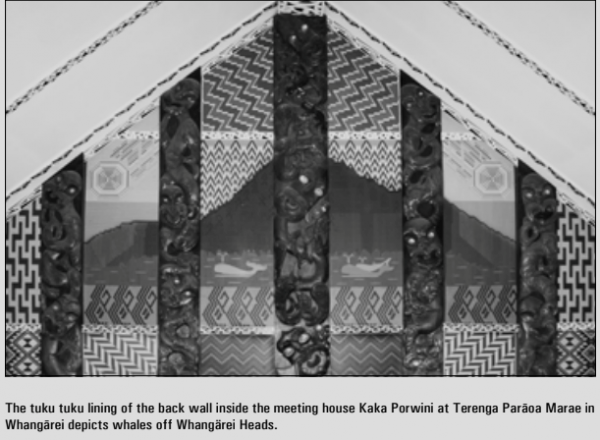 Tribes living around the shore benefited from this gift. At other times tohunga, (priests) climbed pathways to rocky altars hidden on the mountain tops and performed powerful rituals attracting the parāoa, encouraging them to enter the harbour. In the early 1820s, Hongi Hika, the Ngāpuhi warlord returned from England and Australia bringing guns and ammunition for revenge against Ngāpuhi enemies. He called other chieftains of Ngāpuhi to mobilise their armies and meet at Whangārei harbour before taking to the war- trail. Seeing all the chiefs gathered here caused them to be referred to as the legendary parāoa, those ‘great fish of the ocean gathering in the harbour’.

Reference: We acknowledge the following sources of information